How I Changed A Bernie Sanders Fan’s Mind 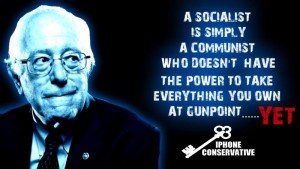 My first attempt at reasoning with a Bernie Sanders fan left me completely stunned. Prior to the conversation, I felt as though I was about to have a fair, reasonable conversation with someone. I was prepared to listen to his reasons on wanting Sanders to be President and expected him to do me the same courtesy on my reasons against him. To say that didn’t happen is an understatement.

When I stated that I thought Sander’s plan would be disastrous to small business in general in the United States he accused me of being a Bush supporter and a supporter of “the war.” He clearly had no idea who he was talking to and didn’t seem interested in discussing any real details of Sanders’ plan. He would throw out random insults having nothing to do with the details we were discussing and seemed to have an emotional attachment to Sanders rather than a belief in his plans or agenda.

But I refused to believe that all Sanders supporters would ignore reason and logic. That’s why I’m writing this. I had another experience with a Bernie Sanders fan and actually changed his mind. Here’s the conversation:

Me: Do you think you’ll be more likely or less likely to get a raise if Sanders is elected and is able to increase taxes on the company you work for?

Him: I hadn’t thought about it that way.

Me: And did you know we already have the corporate/business tax rate on earth?

Me: That’s why so many businesses have left for places with more reasonable taxes like Canada, Ireland, India, the Dominican Republic and a lot of other countries. It’s hard to compete internationally when you’re paying higher tax rates than everyone else. Whether it’s rent increasing, the cost of development or taxes, it doesn’t matter what you call it, it takes money away.

Him: Well that’s a good point. What about the rich people who don’t pay their fair share in taxes?

Me: First of all, “rich” people pay a higher percentage. After the hidden Obamacare taxes, the rich are paying about 50%. To me, that’s ridiculous for anyone to pay. But even if the “rich” were paying the same percentage as you, they’re still paying a greater amount of money than you. 10% of 100,000 is less than 10% of 200,000.

Also, you do realize that the last several years the government had taken in record-breaking levels of tax revenue, right?

Me: Yes, and we are still adding to the debt, which is at record levels! So until we get these idiot politicians to get some sanity on spending the tax dollars they take from us, why continue to give them more? Why? And Bernie Sanders wants to increase spending by the same amount that we are in debt! It’s incredible!

Him: Yeah that part bothered me.

Me: And do you realize that our founders left Britain because of an overtaxing King and system? We’ve had the strongest economy in the world because of freedom. We were free to succeed. We’ve had the right to pursue happiness how we define it. And now we’re willing to just give it away? I want to be free! And if the government punishes wealth, they’ll be less of it. There’s a reason the states with the highest taxes are having a lot of trouble right now (California anyone?). Wealthy people, just like you, will go to places where they’re not financially raped by the government. In telling you, Bernie would just make us all poorer.

Him: I get it. I guess I just like the guy. But you make a lot of sense. If he was elected and taxed businesses more, they’d leave just like the others have. I’ve seen that. A company in my town left the country because they’d save millions of dollars and hundreds of jobs were eliminated when they left. I get it. I guess I was duped by the Bernie hype. It seems pretty suicidal actually.

As pointed out from the conversation above, the problem is the United States ALREADY has the highest corporate tax rate on earth. That’s why businesses are leaving in record number, because that tax rate, already at the highest rate on earth mind you, was further raised under President Obama and now politicians like Bernie Sanders are wanting to raise it again! My friend was right, it will be suicidal to our economy!

International businesses don’t want to come here anymore (with their jobs) because the United Stares has the highest corporate tax rate on earth. And whether you call it taxes, rent, insurance, etc., it leaves far less money for raises, new jobs and research/development of products. U.S. Businesses are crippled already due to taxes and that’s why more people are out of the job market now than anytime in the last 50 years. The government stops factoring them into the unemployment numbers when they have been looking for a job more than 6 months but can’t find one. Therefore, as even Hillary Clinton has admitted, the real unemployment rate is closer to 20%.

If we didn’t have the highest corporate tax rate in earth, there would be more jobs. It’s simple math. U.S. businesses are paying too big of a “hunk.” What’s more, the price of goods and services that everyone pays (like when you go to grocery store or have a repair tech out to work on your oven, you pay more because that business had to pay more in taxes. The money to pay the taxes has to come from somewhere! So raising corporate taxes is actually raising taxes on everyone who buys from them – this includes, obviously, the poor who will have to pay more for food, clothes, cell phones, cars, car repair, gas (the government makes far more in taxes on oil/gas than the oil companies do in profit by the way), over-the-counter medication, homes, computers, trying to start a business, etc.

Taxing businesses even more than they’re taxed now will only hurt the economy and cost jobs. The United States needs to lower their corporate tax rates immediately to help businesses compete internationally and to create more jobs. It really is just basic math and basic economics.

This simple reasoning can convert people away from Bernie Sanders as the case above shows.