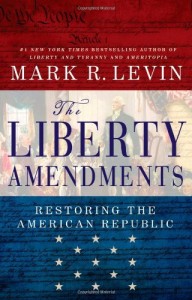 For a century, the Statists have steadfastly constructed a federal Leviathan, distorting and evading our constitutional system in pursuit of an all-powerful, ubiquitous central government. The result is an ongoing and growing assault on individual liberty, state sovereignty, and the social compact. Levin argues that if we cherish our American heritage, it is time to embrace a constitutional revival. The delegates to the 1787 Constitutional Convention in Philadelphia and the delegates to each state’s ratification convention foresaw a time when—despite their best efforts to forestall it—the Federal government might breach the Constitution’s limits and begin oppressing the people. Agencies such as the IRS and EPA and programs such as Obamacare demonstrate that the Framers’ fear was prescient. Therefore, the Framers provided two methods for amending the Constitution. The second was intended for our current circumstances—empowering the states to bypass Congress and call a convention for the purpose of amending the Constitution. Levin argues that we, the people, can avoid a perilous outcome by seeking recourse, using the method called for in the Constitution itself. BUY HERE

Government Bullies: How Everyday Americans are Being Harassed, Abused, and Imprisoned by the Feds [Paperback]

Government regulations are out of control. They dictate how much water goes into your commode, and how much water comes out of your shower head. They determine how many miles to the gallon your car must achieve. Since the Patriot Act, your banking records, your gun registration, and your phone bill are easily accessible by government snoops. Mothers are arrested for buying raw milk. Families are fined for selling bunny rabbits without a license. Home and property owners are strapped with obscene fines, entangled in costly legal messes, and sent to federal prison, all for moving dirt from one end of their land to another.

Unelected bureaucrats, armed with arbitrary rules and no need to back them up, stonewall and attack American citizens at every turn. The damage can be overwhelmingly taxing—financially, emotionally and even physically.

And who is being held accountable? Government regulation and red tape run amok in Washington, and honest, tax-paying citizens are the victims of an administration’s misuse and abuse of power. Now, Senator Rand Paul of Kentucky, takes an in-depth look at the legislation that is trampling the rights of ordinary citizens, strangling their ability to conduct private, everyday activities without egregious government interference. He highlights outrageous searches, seizures and arrests, and points to thousands of regulations that have been added to the books since Obama took office. Most importantly, he charts a direction out of this mess, and toward renewed freedom for all Americans. BUY HERE 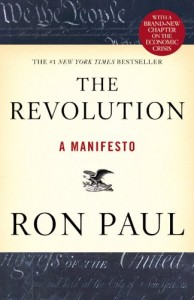 The Revolution: A Manifesto [Paperback]

Congressman, Republican Presidential candidate and author Paul (A Foreign Policy of Freedom) says “Let the revolution begin” with this libertarian plea for a return to “the principles of our Founding Fathers: liberty, self-government, the Constitution, and a noninterventionist foreign policy.” Specific examples demonstrate how far U.S. law has strayed from this path, particularly over the past century, as well as Paul’s firm grasp of history and dedication to meaningful debate: “it is revolutionary to ask whether we need troops in 130 countries… whether the accumulation of more and more power in Washington has been good for us…to ask fundamental questions about privacy, police-state measures, taxation, social policy.” Though he can rant, Paul is informative and impassioned, giving readers of any political bent food for thought. With harsh words for both Democrats and Republicans, and especially George W. Bush, Paul’s no-nonsense text questions the “imperialist” foreign policy that’s led to the war in Iraq (“one of the most ill considered, poorly planned, and… unnecessary military conflicts in American history”), the economic situation and rampant federalism treading on states’ rights and identities (“The Founding Fathers did not intend for every American neighborhood to be exactly the same”). Though his policy suggestions can seem extreme, Paul’s book gives new life to old debates. BUY HERE 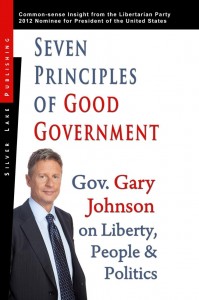 This book is short, well written, very much to the point, and very easily read/understood.This is a great strength of the book, as Gary Johnson does not allow the book to degrade into a dramatic retelling of his political ideologies to the point of boredom, something endemic of books written by politicians. Another aspect, skillfully avoided by Mr. Johnson, that many politician’s books suffer from, is the “holier then thou” approach when spelling out his beliefs. Indeed one gets the sense that he is a far cry from the megalomaniacs who dominate the political arena. If you are a Libertarian, the book will reaffirm your political views. If you are a Republican, you will gain valuable insight into a man, and political ideology, that might ‘steal’ your votes, and as such build an understanding of how one might recapture these votes. If you are Green Party, Democrat, Socialist, or whatever, you will gain knowledge (although perhaps brief) about what Libertarianism is about and learn about one of the key players currently within its ranks. BUY HERE 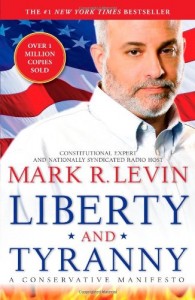 Liberty and Tyranny: A Conservative Manifesto[Paperback]

When nationally syndicated radio host Mark R. Levin’s Liberty and Tyranny appeared in the early months of the Obama presidency, Americans responded by making his clarion call for a new era in conservatism a #1 New York Times bestseller for an astounding twelve weeks. As provocative, well-

reasoned, robust, and informed as his on-air commentary, with his love of our country and the legacy of our Founding Fathers reflected on every page, Levin’s galvanizing narrative provides a philosophical, historical, and practical framework for revitalizing the conservative vision and ensuring the preservation of American society.

In the face of the modern liberal assault on Constitution-based values, an attack that has resulted in a federal government that is a massive, unaccountable conglomerate, the time for reinforcing the intellectual and practical case for conservatism is now. In a series of powerful essays, Levin lays out how conservatives can counter the tyrannical liberal corrosion that has filtered into every timely issue affecting our daily lives, from the economy to health care, global warming to immigration, and more. BUY HERE