Surveillance Powers Set to Lapse with No Deal in Senate 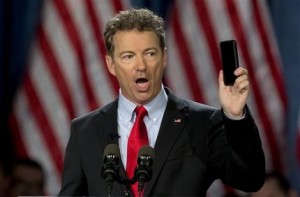 FILE – In this April 7, 2015 file photo, Sen. Rand Paul, R-Ky. holds up his cell phone as he speaks before announcing the start of his presidential campaign, in Louisville, Ky. Key Patriot Act anti-terror provisions, including bulk collection of Americans phone records, expire at midnight unless senators come up with an 11th hour deal in an extraordinary Sunday afternoon session. (AP Photo/Carolyn Kaster, File)

WASHINGTON (AP) — The National Security Agency is losing its authority to collect Americans’ phone records in bulk, after GOP Sen. Rand Paul stood in the way of extending the fiercely contested program in an extraordinary Sunday Senate session.

But that program and several other post-Sept. 11 counter-terror measures look likely to be revived in a matter of days. With no other options, Senate Majority Leader Mitch McConnell, in an about-face, reluctantly embraced a House-passed bill that would extend the anti-terror provisions that expire Sunday at midnight, while also remaking the bulk phone collections program.

Although the lapse in the programs may be brief, intelligence officials warned that it could jeopardize Americans’ safety and amount to a win for terrorists. But civil liberties groups applauded as Paul, who is running for president, forced the expiration of the once-secret program made public by NSA contractor Edward Snowden, which critics say is an unconstitutional intrusion into Americans’ privacy.

“This is what we fought the revolution over, are we going to so blithely give up our freedom? … I’m not going to take it anymore,” Paul declared on the Senate floor, as supporters wearing red “Stand With Rand” T-shirts packed the spectator gallery. Full Story

The Senate advanced legislation 77-17 to reform the National Security Agency on Sunday, but parts of the Patriot Act will nonetheless lapse for a few days amid opposition from Sen. Rand Paul (R-Ky.).

The legislation, called the USA Freedom Act, will not reach President Obama’s desk until after the three measures expire at midnight, meaning that the provisions will expire until the bill is passed by the Senate and signed by Obama later this week.

“The Patriot Act will expire tonight,” Paul declared triumphantly from the Senate floor during a rare Sunday evening vote. “It will only be temporary. They will ultimately get their way.”

Obama has supported the measure and had repeatedly urged lawmakers to support it in the days leading up to Sunday’s deadline. The bill needed 60 votes in order to advance. Full Story.