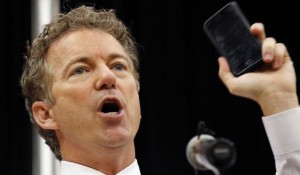 Fresh from his marathon filibuster of the proposed extension to the so-called Patriot Act which allows government snooping on phone calls and other phone use of U.S. citizens, Senator Rand Paul slammed President Obama this morning, accusing him of being deceitful over the issue.

Appearing on CBS, Paul noted “Here’s the thing about the president: He’s disingenuous about this,” the Kentucky Senator said on ‘This Morning.’ “The president started this program through executive order — he could end it anytime.”

“Why doesn’t he stop it? What’s he waiting for?” Mr. Paul said. “He [says], ‘Oh, Congress can stop it.’ He started it on his own. He should stop it, and I’ve asked the president repeatedly, ‘Stop the program.’”

Yet President Obama, who as a candidate campaigned against the Patriot Act and government spying on its citizens, has repeatedly urged the Senate to renew National Security Agency surveillance powers before they expired this past Sunday. He has also made public statements against Senator Paul’s fight to end or delay the government snooping program.