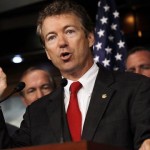 Rand Paul leads the entire Republican field of 2016 presidential hopefuls according to a new poll from Public Policy Polling. Marco Rubio was the previous leader when PPP polled Iowa in February, but has dropped 5 points since then and his unfavorable rating went up as well.

The final results are as follows:

This echos a recent national poll by Public Policy Polling in which Paul led all GOP candidates by 8 points. Calling him the front runner might be premature at this point, but several polls show Paul holds strong support and will be a top contender in the race for the 2016 GOP candidacy.