How Foreign Cash Made Bill and Hillary ‘Filthy Rich’ 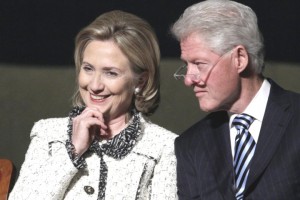 Hillary Rodham Clinton used her clout as secretary of state to do favors for foreign donors who gave millions to her family foundation — and who paid millions more to her husband, Bill, in speaking fees, a new book charges.

Records show that of the $105 million the former president raked in from speeches over 12 years, about half came during his wife’s four-year tenure at the State Department.

The claims in “Clinton Cash: The Untold Story of How and Why Foreign Governments and Businesses Helped Make Bill and Hillary Rich” come just a week after she launched her presidential campaign.

They raise questions about shady foreign money flowing into the Clinton Foundation — and what actions Hillary took in her official capacity in exchange for the cash. Full Story.