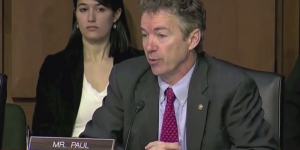 In January 2013, Sen. Rand Paul (R-Ky.) asked then Secretary of State Hillary Clinton during a Senate hearing whether the U.S. was involved in the shipping of weapons from Benghazi to Syrian rebels, which Clinton said she had no knowledge of.

The U.S. government categorically denied it was shipping weapons to the Syrian rebels, many of whom have ties to al-Qaeda and other Islamist groups.

The conservative watchdog organization Judicial Watch has obtained documents that might shed some light on why Sen. Paul asked these questions. Fox News reported Monday that the Defense Intelligence Agency knew that weapons were being shipped from Libya to Syria before the Benghazi attacks. Full Story.