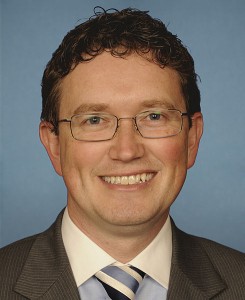 In 2010, after attending several local political meetings in Lewis County, Kentucky, Thomas Massie decided to pursue the office of Judge Executive of Lewis County, in order to fight wasteful spending and intrusion into the lives of the county’s citizens by the government. Massie won the primary election, defeating the incumbent by a large margin, and went on to defeat his Democratic opponent by nearly 40 points. Massie also campaigned for then-U.S. Senate candidate Rand Paul, speaking to various groups on his behalf. Massie resigned as Lewis County Judge-Executive, effective June 30, 2012.

Massie attended the Massachusetts Institute of Technology where he earned a Bachelor’s degree in Electrical Engineering and a Master’s Degree in Mechanical Engineering. During school, he invented a technology that enabled people to interact with computers using their sense of touch, and used that technology to found SensAble Technologies, Inc., which created 70 jobs, and obtained 24 patents. The hardware and software he developed is now being used to design automobiles, jewelry, shoes, dental prosthetics, and even reconstructive implants for wounded soldiers.

The House Committee  of Transportation & Infrastructure  has jurisdiction over roads, bridges, mass transit, railroads, aviation, maritime and waterborne transit. Thomas’s selection to the Oversight and Government Reform Committee puts him in a position to hold the federal government accountable to taxpayers. Further, Representative Massie’s background from MIT and the high-tech business world makes him uniquely qualified to serve his state and country on the Science, Space, and Technology Committee.

Thomas lives on a farm in Kentucky with his wife and high school sweetheart, Rhonda, and their four children.