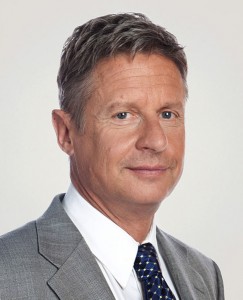 Born in Minot, North Dakota, Johnson moved with his family to New Mexico in his childhood. While a student at the University of New Mexico in 1974, Johnson sustained himself financially by working as a door-to-door handyman. In 1976 he founded Big J Enterprises, which grew from this one-person venture to become one of New Mexico’s largest construction companies. He entered politics for the first time by running for Governor of New Mexico in 1994 on a fiscally conservative, low-tax, anti-crime platform. Johnson won the Republican Party of New Mexico’s gubernatorial nomination, and defeated incumbent Democratic governor Bruce King by 50% to 40%. During his tenure as governor, Johnson became known for his low-tax libertarian views, adhering to policies of tax and bureaucracy reduction supported by a cost–benefit analysis rationale. He cut the 10% annual growth in the budget: in part, due to his use of the gubernatorial veto 200 times during his first six months in office. Johnson set state and national records for his use of veto and line-item veto powers:[2] estimated to have been more than the other 49 contemporary governors combined, which gained him the nicknames “Veto Johnson” and “Governor Veto”.

Johnson sought re-election in 1998, winning by 55% to 45%. In his second term, he concentrated on the issue of school voucherreforms, as well as campaigning for cannabis decriminalization and legalization and opposition to the War on Drugs. Term-limited, Johnson could not run for re-election at the end of his second term. As a fitness enthusiast known for his strong emphasis on personal health and aptitude, Johnson has taken part in several Ironman Triathlons, and he climbed Mount Everest in May 2003. After leaving office, Johnson founded the non-profit Our America Initiative in 2009, a political advocacy committee seeking to promote policies such as free enterprise, foreign non-interventionism, limited government and privatization. He endorsed the Republican presidential candidacy of Congressman Ron Paul in the 2008 election.

Johnson announced his candidacy for President on April 21, 2011, as a Republican, on a libertarian platform emphasizing the United States public debt and a balanced budget through a 43% reduction of all federal government spending, protection of civil liberties, an immediate end to the War in Afghanistan and his advocacy of the FairTax. On December 28, 2011, after being excluded from the majority of the Republican Party’s presidential debates and failing to gain traction while campaigning for the New Hampshire primary, he withdrew his candidacy for the Republican nomination and announced that he would continue his presidential campaign as a candidate for the nomination of the Libertarian Party. He won the Libertarian Party nomination on May 5, 2012. His chosen running mate Judge James P. Gray of California won the vice-presidential nomination. The Johnson/Gray ticket received 0.99% of the popular vote, amounting to 1.27 million votes, more than all other minor candidates combined. This was the most successful result for a third party presidential candidacy since 2000. It was the best showing in the Libertarian Party’s history by vote count.