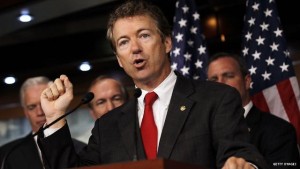 In the wake of a recent domestic terror spree in Chattanooga, Tennessee that left four Marines dead, criticism of “gun free zones,” especially in military installations, has increased.

Debate over changing this policy has followed similar incidents in recent years where unarmed military personnel were murdered, both at Fort Hood, Texas in 2009, and the U.S. Naval Yard shooting in Washington, D.C. in 2013. However, trained military personnel remain disarmed, even in the wake of ISIS calling for “homegrown jihad” against U.S. service members.

The policy that led to “gun free zones” was enacted via a Department of Defense directive in 1992 by George H.W. Bush’s Deputy Secretary of Defense, and was renewed in 2011.

Now, Senator Rand Paul (R-Ky.) is presently calling for a change to this policy, telling reporters that he previously introduced a bill to arm military bases and seeks to do so again.

The Washington Post’s Dave Weigel reported,“Paul, who was elected to the Senate a year after Hasan’s 2009 killing spree on the Texas military base, has long favored a policy shift that would allow guns on bases.” Full Story.

Rand was also quoted as saying, “One of the weird things is that we have 15-20 states where you can open carry. So everybody can carry, except for the military? I think that’s crazy. The rules that apply to everybody should at least apply to the military.”