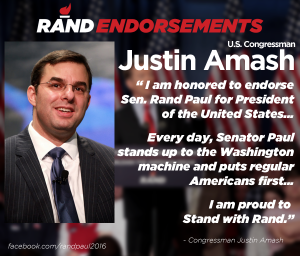 Amash introduced Paul and asked the crowd to “Stand with Rand.” In his endorsement he called Rand a “once in a generation sort of candidate.”

Paul spoke on his efforts and desires to increase protect the privacy of U.S. citizens from government eavesdropping and the sharing of personal data. His message also focused on reclaiming the integrity of the U.S. Constitution, including all ten amendments in the Bill of Rights.