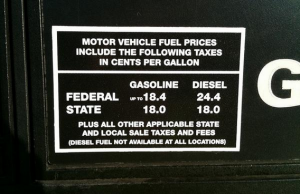 Just when American motorists thought it affordable to get back on the highways this summer, some Washington lawmakers are calling for massive increases to the federal gas tax. While there is currently a highway-funding gap, the answer is not to raise taxes but to reign in waste. Increasing the gas tax will not only worsen Washington’s spending problem, but will have American taxpayers picking up the tab.

Currently the federal gas tax is 18.4 cents per gallon and revenue from the tax goes into the Highway Trust Fund (HTF). The HTF was originally created with the goal of financing and maintaining the nation’s highway systems. However in recent years HTF funds have increasingly been siphoned off to fund everything from bike paths to landscaping and — most infamously — squirrel sanctuaries.

Overspending on non-highway related projects has gotten so bad that spending of HTF funds is outpacing revenue from the gas tax. In fact the federal government spends roughly $50 billion annually while the gas tax only brings in around $34 billion each year. As a result, Congress has repeatedly had to add short term funding patches to maintain the HTF, with the most recent set to expire May 31st of this year.

With the looming May 31st deadline lawmakers are scrambling to find a solution, with some calling for an increase in the gas tax of up to 80%. One doesn’t have to be an economist to realize that the solution to overspending is not to increase the amount of money that politicians and bureaucrats have to overspend. Such a massive increase comes on the backs of taxpayers and avoids addressing the issue of overspending altogether. Full article.