Rand Paul: I Will End ‘Unconstitutional’ NSA Spying ‘on Day One’ 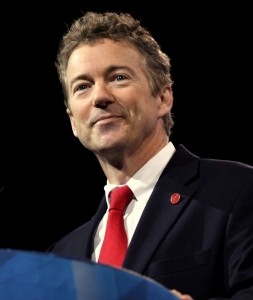 Kentucky Sen. Rand Paul said in his campaign announcement Tuesday that if elected president, he will end the NSA’s “unconstitituonal” surveillance of Americans “on Day One.”

President Barack Obama created the “vast dragnet” of records by executive order, Paul said before a crowd of supporters in Louisville, Kentucky.

“And as president, on Day One, I will immediately end this unconstitutional surveillance.”

Paul said it is possible for Americans to have both liberty and security, “and I will not compromise your liberty for a false sense of security, not now, not ever.

“I say that your phone records are yours,” said Paul, holding up a cell phone. “The phone records of law-abiding citizens are none of their damn business.”

Kentucky Sen. Rand Paul entered the 2016 presidential race Tuesday with a contrarian message that could galvanize voters who have become disenchanted with the Republican mainstream and lead to victory, political strategists told Newsmax.

“Rand Paul is the dark-horse candidate that reminds me most of Ronald Reagan in 1980,” said GOP pollster Matt Towery, who worked on the former president’s campaign. “He is outside the party establishment — and yet, he starts out in sort of a star quality because he has attracted so many of his father’s followers in this campaign.

“That particular group, whether the GOP likes it or not, could make the difference in terms of turnout in the November 2016 race,” Towery added. “He has something to offer that I don’t see in a lot of other GOP candidates.”

Bruce Haynes, a Republican who founded the bipartisan strategy firm Purple Strategies, said Paul “has the potential to be the most spectacular and disruptive candidate in the Republican field.