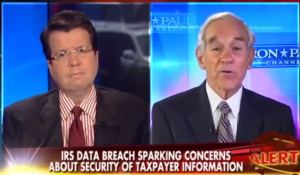 “[E]ventually, we will have to wake up and decide what the role of government ought to be in this country,” Paul said. Right now, he said the government uses the excuse of “fairness” or “safety” to take care of people — believing that “people aren’t smart enough to do this.

“We either have to change that (the role of government) or we’re going to continue to go downhill. This is one of the reasons why the economy is in stagnation, because nobody is giving up on the status quo. How many bureaus or agencies of government ever get truly repealed? No, it’s a continuing expansion and dependency.”

“And now people think they have a right to all this. They don’t think that, you know, you and I might be paying taxes and, therefore, they are getting some temporary benefits, and thank you. They have an absolute right, a demand. A need becomes a right. And really in a free society, you have a right to your life and you ought to have the right to keep the fruits of (your) labor.”

Despite “the mess that we have created,” Paul said he still holds out hope that a younger generation “will come along and say, hey look, we can’t depend on the government to take care of us, and we don’t need all this mischief overseas. So, we need something new and different.”

Dr. Paul said his message of limited government and individual liberty resonates with these young people who have worked hard, graduated from college, borrowed a lot of money, and now can’t find a job.