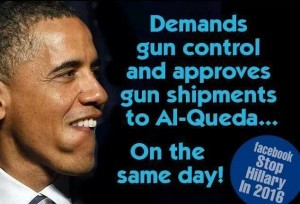 It’s sad irony when the President of the United States pledges to arm our enemies on the same day that he pledges to use so-called “executive orders” to bypass Congress in order to disarm the American people. But that is exactly what happened yesterday.

President Obama waived a provision of federal law designed to prevent the supply of arms to terrorist groups to clear the way for the U.S. to provide military assistance to none other than Al Qaeda. That’s right, the Al Qaeda responsible for the terrorist attacks of September 11, 2013.

And by now you likely see the next piece in this sadly ironic action. That President Obama did this in the same month that the attacks happened.

The president, citing his authority under the Arms Export Control Act, announced today that he would “waive the prohibitions in sections 40 and 40A of the AECA related to such a transaction.”

Those two sections prohibit sending weaponry to countries described in section 40(d): “The prohibitions contained in this section apply with respect to a country if the Secretary of State determines that the government of that country has repeatedly provided support for acts of international terrorism,” Congress stated in the Arms Control Export Act.

The law allows the president to waive those prohibitions if he “determines that the transaction is essential to the national security interests of the United States.”