New 1984 Movie Based On The Book By George Orwell 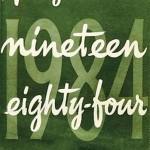 The film production company Imagine Entertainment is remaking the film 1984 based on the book by George Orwell.

The book was made into a movie in the year 1984, but many have called it dull based on modern standards and with the modern special effects of today and computer generated images that can be used to make a visually impressive film, fans of the book should be anxiously awaiting its release.

If you haven’t read the book, 1984 by George Orwell, it is about a  man named Winston Smith who lives in a futuristic dystopian society depicting what 1984 will look like from the perspective of 1949 when the book was written.

Winston seems to be one of only a few who find himself questioning the oppressive government that feels the need to watch his every move. Sound familiar?

With the massive success of futuristic dystopian films like “The Hunger Games,” now is an excellent time to be releasing the film.  If the film is true to the original book, the story shows us where several world governments, including the United States, are headed.

In late 2012, Senator Rand Paul asked if Orwell’s 1984 was already here stating power grabs and privacy intrusions by the federal government. His commentary is in the video below:

Perhaps the book being a film could help wake some people up to realize that 1984 might really be 2013.