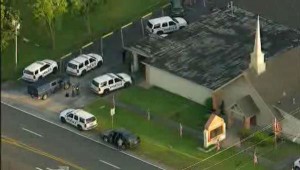 BAYTOWN, TX (KTRK) – A would-be burglar messed with the wrong church and pastor Tuesday. Baytown police say the man kicked in the door of the Church of New Beginnings early and attempted to rob it.

“We have church break-ins here in the city of Baytown,” said Pat Holmes. “But ours had never been broken into. Unfortunately today was the day.”

Around 6:15, police say a man broke into the Church of New Beginnings on North Alexander. Surveillance video shows the man breaking through the door. Little did he know that Pastor Benny Holmes was sleeping inside, and that he was strapped.

“I just want the public to know that this was a robbery,” Pastor Holmes told Eyewitness News exclusively. “He broke in the door, had laptops in his hand.”

Pastor Holmes said he woke up when he heard someone moving around in the church and grabbed his gun.

“I commanded him to stop twice, and he didn’t. So fearing for my life, I did what I had to do.”

And that was shoot. Baytown Police say Holmes shot the man in the right shoulder. Full story.