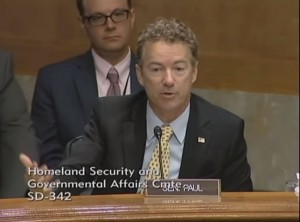 Senator Rand Paul questioned secretary Johnson on the governments bypassing of the Constitutional requirement to gain a warrant before spying on the phone calls of Americans. The discussion got somewhat heated and Johnson’s response is more than a bit concerning.

Secretary Johnson stated several times that he didn’t want to state an opinion on this issue and that he was more concerned about the future than the past. Furthermore, he continually said that he thought the answer was “balance,” in terms of the government’s ability to spy on citizens. Senator Paul pursued, asking how it could be balanced to spy on Americans without a warrant.

Secretary Johnson’s final response can be summed up in the words, “no comment.” This is disturbing for privacy advocates around the world.

One of Senator Paul’s most effective moments comes when he responds to one of Secretary Johnson’s vague responses. Paul says, “I’m one of the biggest civil libertarians there is, but if you get a warrant, I’m fine with you getting and unencrypting data from people….I don’t care how deep you go into it, just call a judge.

What we need to do is have a system where judges are on call twenty four hours a day but there’s still a judge. The reason we separated the judiciary from the police is a very important one. In the civil rights era, tens of thousands if not hundreds of thousands of people were spied upon in our country. War protesters were spied on in our country. The reason we separate the judiciary from the police is to try to prevent the possibility of bias.

And people say ‘Oh well, the government is good’ but look at times when the government wasn’t so good. You know, the FBI director recently pointed back and talked about the times when Martin Luther King was spied upon. That’s why we want these procedural protections.

And so I think as you look forward and as you talk about this, just realize that when you have your doubts about encryption, think back to the times in our history when we didn’t do so good of a job. And what those of us who are wanting to try to protect privacy are doing is trying to make sure that no sort of unconstitutional bias could enter into our legal system again.

I think it’s a very, very big question and there are some of us who say, ‘By all means, get all the information you need on terrorists, but get a warrant with someone’s name on it.’ If it doesn’t work well, put more judges there and have them on the phone twenty four hours a day – we do it for the police. The police don’t go into a home unless there’s a commotion going on or immanent danger – the police stand on the curb at three in the morning and they call a judge. We should do the same for American citizens and we really shouldn’t be collecting their data in bulk. That’s why we’re mad and that’s why people are attempting to encrypt information – to prevent the government from doing illegal searches of our records. – Senator Rand Paul, April 29, 2015.