EXCLUSIVE — RAND PAUL: WE’RE GOING TO TAKE NSA ALL THE WAY TO SUPREME COURT. AND WIN 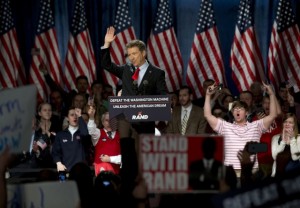 “We initiated a lawsuit on this over a year ago, and we are excited that the appeals court agrees with us,” Paul said.

Now, they’re saying it’s illegal in that Section 215 of the PATRIOT Act doesn’t authorize that—that the government has gone too far—I think that’s a good first step. We want the Supreme Court to eventually rule on whether this is Constitutional or not. Our main complaint, or one of our main arguments is, the Fourth Amendment says you have to name the person who you want to get a warrant—but not naming anyone and putting “Mr. Verizon” down and saying you can get the records of millions of people, you’re not writing a specific warrant.

You’re writing a generalized warrant. This is one of the things that we fought against that the British were doing to us. James Otis famously argued in court that the writs of assistance that the British were using were non-specific and didn’t use the person’s name—and so we wrote the Fourth Amendment to try to stop this kind of stuff. I guess it’s gratifying that the courts are beginning to recognize the problem. We are anticipating and eager for this to get to the Supreme Court.

On Thursday, the Second District’s U.S. Court of Appeals wrote a 97-page ruling in which it found the NSA’s data collection program illegal. Full Story.