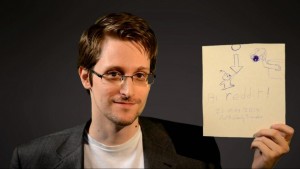 With a little help from his friends at the American Civil Liberties Union, Edward Snowden conducted a Reddit “Ask Me Anything” session Thursday afternoon. The ex-spy spoke about reforms to the National Security Agency and the Patriot Act. Section 215 of the act, which the NSA uses as the legal justification for the data collection program that Snowden revealed two years ago, is set to expire June 1 unless Congress extends it.

In his answers, he expressed significant skepticism that the U.S. government will stop spying on its citizens altogether, but still encouraged users to call their member of Congress and urge them to vote against the Patriot Act extension.

He also answered questions ranging from his take on Sen. Rand Paul’s recent self-described filibuster, to the state of Russian cuisine, to his favorite book. Some of his replies are highlighted below.

Q: What’re your thoughts on Rand Paul’s filibuster against the renewal of the Patriot Act?

A: It represents a sea change from a few years ago, when intrusive new surveillance laws were passed without any kind of meaningful opposition or debate. Whatever you think about Rand Paul or his politics, it’s important to remember that when he took the floor to say “No” to any length of reauthorization of the Patriot Act, he was speaking for the majority of Americans—more than 60% of whom want to see this kind of mass surveillance reformed or ended.

He was joined by several other senators who disagree with the Senate Majority leader’s efforts to sneak through a reauthorization of what courts just weeks ago declared was a comprehensively unlawful program, and if you notice that yours did not take to the floor with him, you should call them right now and ask them to vote against any extension of the Patriot Act, because right now it looks like they’re going to force the reauthorization vote to occur during the dark of a holiday weekend. Full Story.