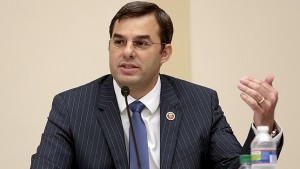 Rep. Justin Amash (R-Mich.) doesn’t seem to trust that House leaders won’t try to sneak through a short-term renewal of expiring Patriot Act provisions while the chamber is on recess this week.

Amash, a vocal surveillance critic, attended the House’s usually empty pro forma session Tuesday, seemingly to make sure he is able to object in case GOP leaders try and go behind lawmakers’ backs.

Amash recited the Pledge of Allegiance but gave no other public comments from the chamber floor during the incredibly brief Tuesday afternoon session.

His presence comes as a sign of heavy concern that Speaker John Boehner (R-Ohio) will use a voice vote to slip through a temporary extension of expiring parts of the Patriot Act. Leadership aides have said the speaker would not use the procedural maneuver to skirt the House’s will, but Rep. Thomas Massie (R-Ky.) — another prominent spy critic — told The Hill last week he was not as sure. Full Story.