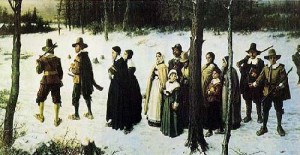 Americans are often surprised to learn that the pilgrims experimented with a communist system when they first arrived in what would later become the United States.

Governor William Bradford, whose memoirs are available to confirm that this happened, established a socialist/communist system when the pilgrims landed at Plymouth Rock. Everyone would “share” in the crops, food, clothing, etc. It sounded like a great idea.

But human nature soon prevailed. As many of the pilgrims learned, on such a system if one chose not to work, they would still eat because someone else would work to bring in what was needed.

So why go out in the heat or cold to work when someone else would do it? This system proved to be unsustainable.

More and more of the pilgrims chose the path of sitting around or faking illness until the nonworkers outnumbered the workers. Women resented the idea of cooking for someone because his wife chose to be a non-worker and, according to Governor Bradford’s memoirs, those women considered it a form of slavery. In a short time the number of nonworkers outnumbered the workers to such an extent that at one point each person was rationed to 3 to 4 pieces of corn per day. You read that right – PIECES (or kernels) of corn. They were starving.

It was at that point that Governor Bradford knew that such a system would not work and even in a best case scenario would be at the mercy of a human’s nature to be lazy. So he assigned each family or single person a piece of land and told them that whatever they produced off that land would be theirs to do with as they wished. They were free to keep, sell, give away or invest whatever was produced from their land or its products and no one else would have rights to it. This gave people motivation to work and be productive because if they didn’t, they weren’t entitled to the work of anyone else’s hands. They had to work for themselves.

The number of hands working increased tremendously to the point that the pilgrims had abundance. So one family member could work and the others could keep the house, prepare meals, hire help, or take some time off to enjoy life. It was a pure free market and it led to the resurgence of the pilgrims and the feast that we now call Thanksgiving where they shared what they had with the Native Americans.

We must not forget the lesson that the pilgrims learned the hard way.