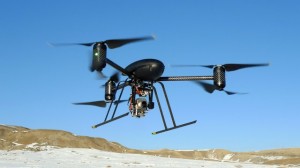 A South Bay man who routinely records police activity has started using an unmanned drone to help with filming, just the latest example of how law enforcement is increasingly encountering the technology on the civilian side.

Torrance resident Daniel Saulmon, 42, has been flying his drone around the South Bay for about a month. He created a website on which he regularly posts videos shot at police DUI checkpoints and traffic stops that he says helps monitor possible abuses of power.

“My attorney told me there isn’t really much regulation on them,” said Saulmon, whose recordings are well known to South Bay officers. “I don’t think it’s a substitute for a hand-held camera, but it’s definitely a complement.”

Saulmon recently posted a video of himself flying his drone at Staples Center, where earlier this month a crowd of rowdy Kings fans celebrating the team’s Stanley Cup win took down a Phantom-model quadcopter. He has also flown his drone over South Bay oil refineries, outside of military bases and along the Hermosa Beach pier. Source.