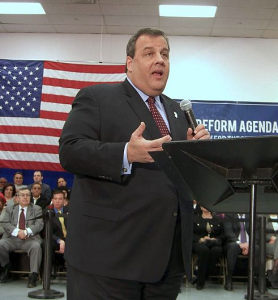 In speaking of those concerned with constitutionally-protected privacy, Christie said, “I just want us to be really cautious, because this strain of libertarianism that’s going through both parties right now and making big headlines, I think, is a very dangerous thought.”

Asked whether he includes Paul — a fellow potential 2016 presidential candidate — in his criticism, Christie proceeded. “You can name any one of them that’s engaged in this,” he said. In speaking of the victims of the 9-11 attacks he said, “I want them to come to New Jersey and sit across from the widows and the orphans and have that conversation. … I’m very nervous about the direction this is moving in.”

Christie acknowledged that there will always be mistakes when it comes to national security and protecting privacy, but said Americans need to “stay focused on what’s at stake.”

He dismissed some of the current privacy/national security debates as “esoteric.”

Paul’s office fired back on Friday, saying Christie may need a “new dictionary.”

“If Governor Christie believes the constitutional rights and the privacy of all Americans is ‘esoteric’, he either needs a new dictionary, or he needs to talk to more Americans, because a great number of them are concerned about the dramatic overreach of our government in recent years.”

Doug Stafford, a senior adviser to Paul, said in a statement to POLITICO. “Defending America and fighting terrorism is the concern of all Americans, especially Senator Paul. But it can and must be done in keeping with our constitution and while protecting the freedoms that make America exceptional.”